For the love of our unborn child 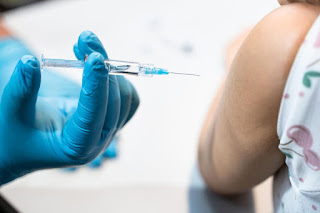 Why we decided to have my pregnant wife vaccinated against Covid-19. A scientifically sound argument.

They were all incomprehensible, from the gynecologist to the family doctor to my aunt, a retired doctor - why in the world had a pregnant woman vaccinated against Covid-19? My wife is expecting a child, and that's exactly what we wanted to do. But even people who should know their way turned it down - not to mention the fathers and mothers in the playground, who looked horrified when we told them about our vaccination plan. The lack of understanding was so great that we hardly dared talk about it with others.

In the end, vaccination is the only solution

The vaccination is seen by both the environment and many pregnant women as a danger to the unborn child. It should be clear to everyone by now: The virus will remain, everyone who is not vaccinated or who can completely isolate themselves (and pregnant women can almost never do that) will be infected sooner or later - and hardly any of the pregnant women have been immunized yet. Because they were excluded from the vaccination campaign for a long time, then only those with previous illnesses were allowed to be immunized, finally also those, who were exposed - and according to STIKO, pregnant women with "an increased risk of exposure due to their living conditions" have been vaccinated for three weeks (in each case from the second trimester). At the moment, almost all pregnant women in Germany are still without vaccination protection. At first there was no way, and now women expecting children are skeptical.

Covid infection is much more dangerous for pregnant women

Unfortunately, pregnant women with a Covid infection are about three times more likely to suffer a serious disease course than women of the same age who are not expecting a child. The risks are also drastically increased compared with non-infected pregnant women: A study of 400,000 pregnancies in the USA between April and November 2020 showed that the risk of a heart attack in pregnant women suffering from Covid-19 was 27 times higher, for the death of the mother increased by 28 times, since the death of the child by 66 percent. The reasons have not been finally clarified, but it is reasonable to assume that the already reduced lung volume during pregnancy and the increased tendency to clot blood promote corona complications.

As in Germany, pregnant women in Israel were initially excluded from the vaccination campaign. When the number of infections soared, fifty women who were expecting a child were suddenly in intensive care units - this is why pregnant women have been vaccinated as a priority in Israel since January.

The headlines were made in the case of a 32-year-old mother of four with no previous illnesses. She was expecting her fifth child and died with him in the thirtieth week of pregnancy of Covid-19 - her brother-in-law was a well-known opponent of vaccination and had advised against vaccination.

A difficult course can hit anyone

Parents do not leave such a case indifferent. I imagine that the four small children are now asking about their mother, who is no longer there - I cry. It should be clear to all pregnant women that they too can have a severe Covid course. With reports of such terrible pregnancy complications from around the world, my wife and I felt like a bombing was imminent - and everyone can go into the bunker, except pregnant women. Because while we work in the home office, our two-year-old daughter goes to the crèche. From there, she regularly brings the current infections home with her - and Sars-CoV-2 has spread rapidly among children in recent months.

As society and business enjoy the successful vaccination campaigns, we looked at the numbers with increasing concern. The vaccinations went ahead, yes, as the first contact person, I was also able to get the two injections. Only: What good was that to my wife and our unborn son? Sure, she wore FFP-3 masks and never met people without one indoors. But we have the gateway for the virus through our daughter, it cannot be closed.

Well, yes, that would of course be done with a quick step for my wife in the home on the stove. "Stop working," advised the gynecologist when my wife asked for a certificate that she could be vaccinated. That coincides with what other women report with whom we found ourselves on the Internet. "There were always sexist undertones free of charge," wrote a 29-year-old pregnant woman who works in the health service and fought for her vaccination for months. The doctor at the vaccination center told her that it was "stupid to get pregnant during a pandemic".

My wife tried to get a certificate from your gynecologist and your family doctor that she could be vaccinated - but to no avail. Many medical professionals are very reluctant to issue such certificates. It is probably the reflex to protect pregnant women and the unborn child that turns into a danger in the pandemic. Even our doctors have never experienced a situation like the current one, in which it is more dangerous to be inactive than to give a vaccination, the benefit of which in comparison to the risk has not yet been clearly proven.

Israel and the USA are leading the way

But while the data on the risk from Covid-19 are clear, there are no indications that there is a risk to women or fetus from the vaccination. More than 200,000 pregnant women, mostly in Israel and the United States, have been injected with mRNA vaccines. A study of almost 36,000 participants compared vaccinated pregnant women with those who had been pregnant before the pandemic - and found no differences in the frequency of complications during pregnancy.

Sure, future complications cannot be completely ruled out - the Covid-19 vaccines have simply not been around long enough, and a controlled registration study is not yet available. But a quick digression into biology explains why harmful long-term effects are unlikely. The vaccines from Moderna and Biontech / Pfizer, which are exclusively used for pregnant women because of their age, contain mRNA as the active substance - and our cells are always full of such molecules. Because as soon as one of our genes is active, it means that a copy is formed in the form of mRNA. Since many genes have to be switched on and off more often, the body quickly breaks down mRNA molecules. Studies with mRNA vaccines showed that half of them were no longer present in the muscle they were injected into after 19 hours.

A change in the genes is not to be feared

During the approval process in rats and mice, Biontech also demonstrated where the vaccine was going after the injection: Most of it remained in the muscle, one fifth made it to the liver - and less than 0.1 percent of the vaccine was washed into the genital organs. Even with a minimal amount of the vaccine passing through the placenta and into a cell in the unborn child, it would be difficult to imagine how mRNA could harm the fetus. The most likely would be an immune response to the spike protein - depending on the maturity of the fetus. But even that would most likely be similar to an immune response to other foreign proteins that the fetus is confronted with.

It can therefore be almost ruled out that the vaccine could reach the fetus and damage it, let alone change its genetic material. The injected mRNA does not get into the nucleus in which our DNA is located.

So, you can tell from these lines that my wife and I, as parents, did not make it easy for us to decide whether to vaccinate during their pregnancy. The way there was difficult - because the recommendations for pregnant women six weeks ago were still very restrictive, because the gynecologist and family doctor did not want to advocate the vaccination. In the end, the doctor at the vaccination center grumbled: "If you want to be responsible if your child develops a malformation, then please." You have to be very well prepared to get vaccinated anyway. But it was us, my wife got the vaccination, meanwhile, also the second one. The pregnancy is going perfectly so far, just now a fine ultrasound has shown that all organs of the fetus are intact, no trace of malformations.

The fight against incomprehension

However, women who come out as pregnant women who want to be vaccinated as soon as possible experience in comprehension and hatred on social media channels. It is "irresponsible" to the child, since women can play guinea pigs for the pharmaceutical industry after giving birth if they really wanted to. Again and again the wrong argument comes up that vaccinations are generally dangerous during pregnancy. On the contrary: for other vaccinations, there is even an explicit recommendation to give them during pregnancy - for example those against flu and whooping cough. The antibodies from the mother's blood pass through the placenta into the fetus's circulation. Two weeks after vaccination, antibody levels in the mother's blood reach high levels and many of the molecules are transferred to the fetus. And this increases the likelihood that the child will be protected from infection with the pathogen that was vaccinated against. In the womb and also after birth. Infants even receive a replenishment of antibodies through their breast milk.

New studies show that this also applies to the mRNA vaccines against SARS-CoV-2. In vaccinated pregnant women, neutralizing antibodies were found in the umbilical cord blood and in breast milk - the concentration was higher than in women who had already had an infection.

We and the other pregnant women who are vaccinated against Covid-19 do this not out of selfishness, not because we are blind to risks, we do it out of love for their unborn child - to protect it from an infection that is life-threatening in the short term can be and of which nobody yet knows what long-term consequences it could have.

FC
Writer and news editor I work on a site Fashion QA .
ShowHideComments
Latest posts from section HEALTHY Written by FC
Follow our website at