Princess Charlène is back with an emotional message 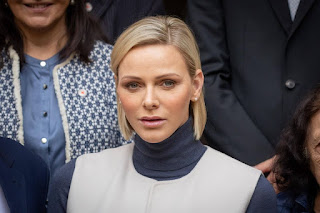 Princess Charlène was quiet for a few weeks. After sharing a sweet family photo with her husband Prince Albert of Monaco and her twins Gabriella and Jacques with her followers at Easter, there was now almost six weeks of radio silence on her social media channel. But now the Princess of Monaco is back. With an unexpected look and a very special message.

Whether with a rocky undercut or in a strict dress - Princess Charlène von Monaco, 43, knows how to surprise the public with unexpected looks. But now she is exchanging dresses, coats and heels for boiler suits and combat boots. And there is an extremely emotional reason for that.

Princess Charlène: In an army look for a good cause

No, these are not footage from the set of a military film. They show Princess Charlène as part of the "Save The Rhinos" project. A topic that is so close to the heart of the princess that she wants to help on site and leaves her classy wardrobe in Monaco. In an olive-green boiler suit with casually tied lace-up boots, she poses on a car. Particularly nice to see is the smile with which the princess, who has recently been seen with a more serious expression, looks into the camera. Her boyish short hairstyle complements the utility look perfectly.

"Save the Rhinos" - A project close to the heart

How connected she is to the project for the protection of rhinos is clear in a large photo. With a sad look and bowed head, the mother of two hugs a wounded rhinoceros. The 43-year-old wears a camouflage parker jacket, brown trousers and rubber boots. She writes: "Thank you for not forgetting us." With this emotional post, Charlène would like to draw attention to the increasing endangerment of rhinos.

Split opinion of the followers

When the followers see another photo with local rangers, not everyone is thrilled. With a serious look she stands next to the armed men in the savannah. If you keep wiping, you will even see photos in which they cut off the horns of the rhinos. Not everyone understands that they want to save the rhinos with it. This project was chosen deliberately. The animals are anesthetized and the horns are removed. However, all of this only happens to protect the animals from brutal poachers who hunt and brutally murder the rhinos because of their horns.

FC
Writer and news editor I work on a site Fashion QA .
ShowHideComments
Latest posts from section FASHION Written by FC
Follow our website at